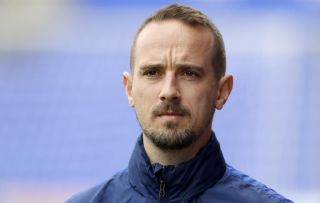 An allegation that former England Women coach Mark Sampson used racist language in a team meeting at Stevenage has been found not proven, with an independent commission concluding: “Some of those giving evidence have lied.”

Stevenage first-team coach Sampson was charged with misconduct by the Football Association in November after it was alleged he said “a black Nigerian centre-back, you can’t rely on them” during a club meeting related to transfer targets on September 2.

Sampson denied making the remark, with former manager Dino Maamria and the club’s ex-goalkeeping coach Ali Uzunhasanoglu making the allegation against him.

A charge against Mark Sampson for a breach of FA Rule E3 has been found not proven by an independent Regulatory Commission. Full statement: https://t.co/X0h4GpzJTNpic.twitter.com/I4WipF8Sf7— FA Spokesperson (@FAspokesperson) January 20, 2020

The independent regulatory commission, which heard the case earlier this month, said in its written reasons: “The commission did not find the evidence of any one of those who attended the meeting compelling, or sufficiently compelling, to allow the commission to be confident that they could properly base a judgement upon it.

“Equally, consideration of the collective evidence called in respect of the two quite different versions of the same meeting, did not enable the commission to have that necessary confidence.

“This was not a case where it could sensibly be said that a witness had somehow been mistaken about what had, or had not, been said at the relevant time. Put simply, some of those giving evidence had lied.

“It is clear that misplaced loyalty and a willingness to be untruthful was an inescapable part of this case. Collusion of evidence, one way or another, was unattractively at play in this case.”

Maamria was sacked by Stevenage on September 8, with Sampson taking charge on a caretaker basis. Maamria told the commission he was “annoyed and disappointed” with Sampson for not leaving the club at the same time.

The commission wrote: “When it was clear that was not to be the case, he (Maamria) sent a WhatsApp message to Mr Sampson describing him as ‘a snake and a spineless c***’.”

The commission wrote that Uzunhasanoglu was informed by Sampson on September 9 that his services were no longer required. It states that Uzunhasanoglu first informed the club about the allegation of Sampson making a racist remark on September 10 in a text message to club chief executive Alex Tunbridge before reporting it to the FA the following day.

“That concern had also to be seen in the light of the contradictory accounts given by others in the room, even if, as the commission concluded, that other evidence had itself to be approached with a sense of caution.”

The commission said it did not find Sampson “compelling” either, adding it had been “left unable to conclude that Mr Sampson had provided a version of events that was sufficiently reliable upon which to confidently and correctly base a conclusion as to the origin of the truth”.

Stevenage chairman Phil Wallace said in a statement after the ‘not proven’ verdict was announced: “I am delighted that Mark is now able to concentrate fully on his future and not be troubled by allegations made by former manager Dino Maamria and former coach Ali Uzunhasanoglu after they had been dismissed.

“The club have stood shoulder to shoulder with Mark because the evidence presented by those independents present at the time conflicted with the allegation.”

Sampson was sacked as England Women head coach by the FA in September 2017 following allegations of “inappropriate and unacceptable behaviour” in his previous role as manager at Bristol Academy.

He had also been the focus of bullying and racism claims, first made by Eni Aluko and then Drew Spence.

The FA said the allegations were investigated and Sampson was cleared of any wrongdoing.

Sampson, who reached a financial settlement with the FA over his dismissal in January 2019, conceded he should have handled the claims differently, saying it would always be a “big regret” and he apologised unreservedly to the two players.