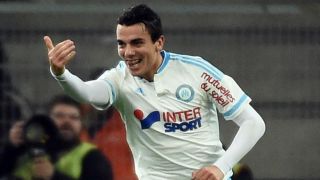 Antoine Rabillard's 96th-minute goal salvaged a dramatic point in a 1-1 draw for 10-man Marseille against Lille in Ligue 1 on Friday.

It looked as though Marseille were heading for defeat in front of their home fans at Stade Velodrome as Sebastien Corchia gave Lille the lead before the hosts saw Abdelaziz Barrada harshly sent off.

But Rabillard proved to be in the right place deep into stoppage time as Marseille rescued a point, with many of their faithful having already left the stadium.

Marseille - without injured goalkeeper Steve Mandanda for the first time in the league since May 2010, a run of 212 games - fell behind in the 57th minute when Corchia broke through Georges-Kevin N'Koudou's tackle on the byline and lifted the ball over replacement keeper Yohann Pele.

Things went from bad to worse for Michel's men as substitute Barrada was shown a straight red card for a seemingly innocuous challenge on Yassine Benzia seven minutes from time.

But with the last action of the game, Paolo De Ceglie's header was saved by Vincent Enyeama and the rebound fell perfectly to Rabillard, who tapped home from a yard out to break Lille hearts.