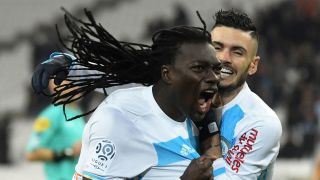 Bafetimbi Gomis fired a hat-trick as Marseille thrashed 10-man Montpellier 5-1 in Ligue 1 to ensure a triumphant debut for Patrice Evra.

The victory moves Rudi Garcia's men up to fifth in the table ahead of the weekend action and further prospective moves into the transfer market after securing veteran left-back Evra from Juventus this week.

Rolando was also on target and Florian Thauvin added a late penalty after William Remy was sent off, ensuring Marseille bounced back from successive defeats to title-chasing Monaco and in-form Lyon.

The hosts flew out of the blocks and caught their south-coast rivals cold in the fourth minute when on-loan Swansea City striker Gomis was allowed ample room to advance on to Remy Cabella's flick-on for his first goal since the mid-season break.

Evra was involved in the 19th-minute second, finding Thauvin, whose chipped pass was nodded across goal by Cabella for Gomis to slot home.

71' Patrice Evra makes way for Doria for the first substitution of the match after a great first performance as a OM player! January 27, 2017

Montpellier goalkeeper Laurent Pionnier was forced to deny Gomis shortly after each of his goals as Thauvin and Cabella made a timely demonstration of their creative talents in light of Marseille's on-going pursuit of Dimitri Payet.

Steve Mounie and Jonathan Ikone drew sharp stops from Yohann Pele in the Marseille goal as Frederic Hantz's side looked to respond, but it was 3-0 in the 38th minute – Rolando heading home with a punch on the nose from Pionnier for his troubles.

Ryad Boudebouz's superb free-kick reduced Montpellier's deficit four minutes after the break and Evra had to make a last-ditch tackle on Mounie as the pressure increased.

The former France captain made way to a warm ovation in the 72nd minute and Gomis secured the matchball five minutes later, slamming into the top corner for his 14th of the campaign.

There was more misery for Montpellier when Remy handled and Thauvin converted, and they sit two points above the relegation play-off place in 14th.