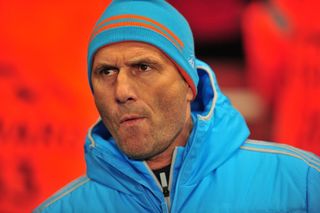 Founded in 1899, Marseille became the first club in French history to mark 1000 league wins – an achievement Baup was proud of.

"This game, it is of course three points but it is also an important moment in the history of the club," Baup said.

"It is a moment to celebrate as tonight was the 1000th league victory of Olympique Marseille. That's what we should remember and celebrate.

"It speaks volumes about how big this cub is and its ability to find in its glorious past, the strength to build a bright future.

"Everyone here talks about that. I just wanted to share that emotion with you today."

Baup was particularly delighted with his players' response to Tuesday's 2-0 UEFA Champions League loss to Arsenal.

"We are in a situation where we must fight and that's what did my players tonight," he said.

"It was a complicated game as we played on Tuesday and we did not get as much rest as we wanted even if some of my players did not play against Arsenal.

"It is not easy to play straight away after that kind of game.

"The first half was interesting in terms of possessions and opportunities; it was more difficult for us in the second half, but we were able to resist and get the result we wanted."