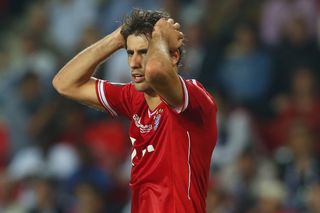 The Bundesliga champions confirmed on Thursday that the midfielder was back in individual training following surgery and rehabilitation.

However, the Spain international is yet to train with Pep Guardiola and the first team and does not want to rush his recovery.

"The operation went well, and my sports rehab programme is on schedule," he told the club's official website.

"The important thing for now is to continue training with no reaction to the injury, and get back to a normal training rhythm.

"What I need now is training, training, and more training, so I quickly recover my form. Obviously, I want to be part of it again as fast as possible, but we mustn't go over the top."

Bayern currently top the Bundesliga and are unbeaten so far in their domestic campaign while sitting top of Group D in the UEFA Champions League.

Despite not having lost in all competitions since defeat to Borussia Dortmund in July's DFL-Supercup, Martinez believes Bayern still have room for improvement.

"We've really been playing very, very well," he explained. "The team has improved from match to match, as we put the coach's ideas into practice better and better.