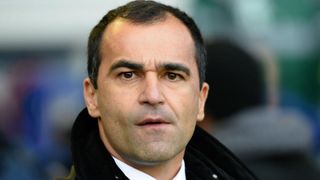 England internationals Jagielka and Stones have paired up in Everton's previous four league games, securing a clean sheet in the last three of them.

Martinez puts it down to Jagielka's "undoubted" leadership skills and willingness to help Stones in his career.

"I always felt that Phil and John could do something special,"explained Martinez in a press conference on Tuesday.

"It has been a little bit difficult after Stones got his injury but since he has been back, the pair of them have been terrific.

"Jagielka is a true captain and a leader, and he wants to help Stones in his own career both at club level and at international level - they compliment each other very well.

"We have missed Stones, but he is back now and working hard for the team which is clear to see."

Wednesday sees Everton travel to Chelsea, who have extended their lead at the top of the table to seven points following their win against Aston Villa on Saturday.

However, Martinez claims it is too soon to make title-winning predictions.

"It is too early to say, you never know with the Premier League, it has surprised us so many times and there are still so many games left to play.

"We will go to Chelsea with a gameplan and try to keep our good run going by pressing them well, not giving the ball away cheaply and by making sure our defence is in top form."