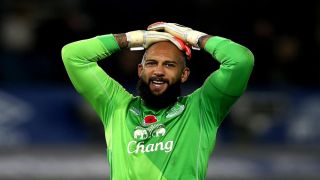 Howard then flapped at a Danny Simpson cross and was made to pay when Vardy pulled the ball back for Esteban Cambiasso to turn home.

Matthew Upson's late own goal ensured Everton salvaged a point, but the Merseyside club are without a home win in the top flight since December and sit 12th in the table.

There have been calls for Joel Robles to be restored to the starting line-up at the expense of Howard, but Martinez is standing by the former Manchester United keeper.

The Everton manager said: "I don't see Tim as directly responsible for the draw.

"The first one is quite an unlucky action. He gets in some sort of a block, it hits John Stones' legs and it ends up in the Leicester striker's footpath.

"We have three players around him and it ends up with him [Nugent]. I don't think it was such a major error.

"I don't think it would solve anything if we just single out the player who made that mistake. As a team we need to defend much better in those situations.

"Tim Howard is one of our leaders, one of the most solid performers. What he brings as a goalkeeper is his understanding with other players, what he has achieved in the game, and when he is fully fit, he is a very strong performer.

"I don't think that is the difference between getting three points and one point [against Leicester]."