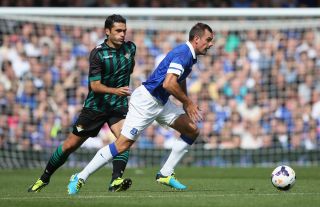 The midfielder made himself unavailable for national selection after Euro 2012 - having failed to make an appearance in the tournament under former boss Giovanni Trapattoni.

However, the 25-year-old is in line to feature for his country in their two final FIFA World Cup qualifiers against Germany on Friday and Kazakhstan on Tuesday.

Martinez feels the call-up could be a real boost for Gibson at an ideal time in his career.

"It’s really positive because Darron – and any player – wants to represent their country," he told Everton's official website.

"You want to play at the best level you can and I think Darron is at that moment in his career when he needs to play for his country.

"He has got a lot to offer because he is such a unique footballer in the things that he does and he’s going to be a big asset for the Irish squad."

Gibson made his first Premier League appearance of the season in Saturday's 3-1 defeat to Manchester City following a knee injury.

It was Everton's first defeat of the campaign and Martinez believes Gibson can prove a handy addition for his side.

"For us, it’s important that he gets a little bit of consistency in his work because the injury has kept him away a little bit and it is frustrating for everyone," he continued.

"The half an hour he played at the Etihad is going to help him immensely and now it’s just about making sure he can get through the demands of international football and that we have got a strong player from now until the end of the season."