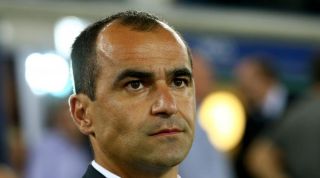 Everton, who top Group H with four points from their first two games, visit the Stade Pierre Mauroy on Thursday before welcoming the Ligue 1 club to Goodison Park for the return fixture next week.

Lille are in third after two draws and they are in the midst of a poor run of form domestically, having won just one of their last five league matches.

However, Martinez has great respect for Rene Girard's side and believes the pair of matches are comparable to a final in terms of their importance to the two sides.

"Lille are a team we respect and admire," Martinez said.

"They have had a few injuries and probably they are seeing the game as the most important of their campaign.

"For us it is exactly the same, and it could be some sort of a little final within the group stage due to the importance of these games.

"I was a big admirer of the way Lille played last season - in some of the games they were really brave and really open.

"This season they have started well but are waiting to really click, and that is our worry. We don't want them to click on Thursday.

"We need to be concentrating on what we want to do and make sure we perform extremely well.

"It is an exciting game from our point of view.

"We have phenomenal away support and we have been looking forward to this fixture for a long, long time.

"We are really excited to perform well and make our fans really proud, because we know they are travelling in big numbers."