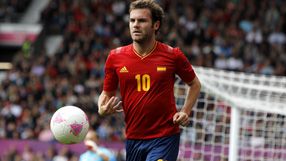 Mata has been in sparkling form for European champions Chelsea in recent weeks but was overlooked for the World Cup Group I qualifiers in Belarus on Friday and at home to France four days later.

He is one of several Spanish players, alongside the likes of Arsenal's Santi Cazorla and Manchester City's Javi Garcia, who have performed impressively in the English Premier League but rarely get a look-in with the national side.

"That a player like Mata is absent shows how hard it is to get into the squad," Martinez told a news conference as the players gathered at their training camp outside Madrid.

"For me he is one of the five best players in the Premier League and the fact he is not here shows the quality we have," added the former Athletic Bilbao player who joined Bayern Munich in the close season.

"But we cannot all be here and for sure many players deserve a place. He [Mata] is very strong mentally and that will help him as he tries to improve and win his place back."

Mata, who competes for a place with Andres Iniesta, David Silva, Cesc Fabregas, Pedro and Jesus Navas, told Spanish media on Monday he expected to be included in Del Bosque's plans after playing a part in the triumphant 2010 World Cup and Euro 2012 campaigns.

"I was excited and confident about being called up, all the more so because of the form I am in at Chelsea," said the 24-year-old.

"I am in the best form so far since arriving in London. What I need to do now is keep it up so that I can win my place back."

Spain won their opening qualifier away to Georgia 1-0.