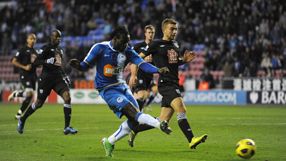 Since making the step up from the Championship where he rose to prominence with Crystal Palace, the 19-year-old has endured a stop-start career in the Premier League and has failed to hold down a regular starting berth.

While at Palace, the youngster was a reported target for a number of Europe’s big guns, including Arsenal and Real Madrid, and it was seen as a major coup for Wigan when Moses moved north after the Eagles had entered administration.

But the Nigerian-born forward has failed to make the impact many expected, and after only making one start for Wigan this season in the Premier League, many were left feeling that Moses was another over-rated talent.

However, manager Martinez is wary of the fact that Moses is still young and, being a rare English talent, Wigan must nurture him in the appropriate way before fans get to see the best of the England Under-21 international.

“He’s one of those exciting talents that you don’t see too often nowadays in football,” Martinez told Absolute Radio.

“He brings that excitement and that enthusiasm onto the football pitch.

“He knows the high expectations we have for him and how much we enjoy having him around."

Martinez revealed that Moses picked up a few knocks during pre-season and, after opening his tally for the season in the recent win over the Baggies, he believes the best is yet to come from the highly-rated youngster.

“He started the pre-season really well and then he had a couple of knocks and that set him back a little bit but it was great to see him against Liverpool,” he added.

“He came out and he was a breath of fresh air. Then he came out against West Brom and had a massive impact on the game.

“So for a really young man he’s grown up so much that he’s going to give the Wigan Athletic fans many, many afternoons of good football.”

Listen to Manchester United v Wigan on Absolute Radio extra - on DAB Digital Radio, 1215AM and online in the UK from 1.30pm. Tune in to listen to the full Roberto Martinez interview. For more visit www.absoluteradio.co.uk/extra