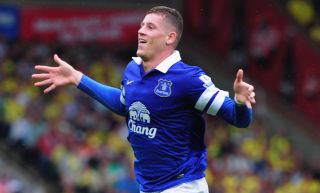 The 19-year-old - starting only his fifth Premier League game - linked play nicely alongside Leon Osman and Marouane Fellaini in the centre of midfield at Norwich City on Saturday.

Barkley capped his performance with a stunning left-foot strike from 20 yards at Carrow Road as Everton claimed a 2-2 draw.

And the maturity and attitude of Barkley has really impressed his manager.

"I think when you've got good competition for places in football, the mentality narrows down really quickly - all he wants to do is keep that place and keep enjoying his football.

"That's what I want him to do. He's been performing in that manner throughout pre-season in different spells and now he wants to make sure that continues."

Everton midfielder Darron Gibson (knee) is currently sidelined and although he is hopeful of returning for Saturday's home fixture against West Bromwich Albion, he may not win his place back immediately due to Barkley's form.

"Any youngster could be very, very proud of what he did. He got on the ball and he made us play.

"I think he is a lot older in terms of football experiences and I think his time with England (youth teams) has really helped him in terms of opening his mind.