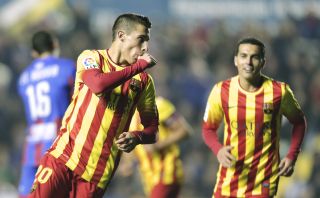 Tello has been linked with a move away from the Catalan club after finding first-team opportunities hard to come by.

Barca coach Martino handed the 22-year-old a start in the Copa del Rey quarter-final first-leg clash in Valencia on Wednesday night and Tello made the most of his chance by scoring a second-half hat-trick in a 4-1 victory.

Martino was delighted with the impact made by Tello and believes his match-winning display bodes well for the La Liga champions.

"Some players can show their quality in 90 minutes and others in 15. Tello played 90 minutes, he's been more explosive these last couple of weeks," Martino told the club's official website.

"This is great for Barca and also for him – he's gaining confidence."

Liverpool, Arsenal and Tottenham are among the clubs reported to be interested in signing Tello.