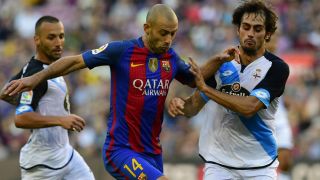 Javier Mascherano has put pen to paper on a new contract at Barcelona.

The 32-year-old Argentina international was linked with a move to Juventus during the close-season but he will now prolong his stay with Barca, who he joined from Liverpool in 2010.

Since then, Mascherano has made 289 appearances for the club in all competitions and won 17 honours.