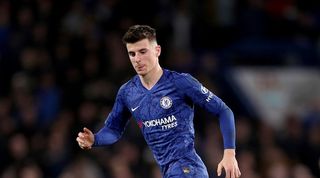 Mason Mount has hinted that Chelsea need a plan B following their defeat by Newcastle on Saturday.

The Blues dominated possession at St James' Park but were beaten 1-0 thanks to Isaac Hayden's late goal.

Frank Lampard's side remain five points clear of the chasing pack in the race for the top four, but Manchester United could cut that gap to two points with victory over Liverpool on Sunday.

And Mount believes Chelsea may need to find new ways to break down opposition teams that sit deep and pack men behind the ball.

"It’s a tough one to take," the England international said. "Even a draw we would have been disappointed with. We had a lot of possession, we created a lot of chances, but when we score no goals we can’t say anything.

"They did unbelievable to defend the whole game, making blocks, winning tackles, and in football anything can happen. They then go to the other end of the pitch late on and score.

"We spoke after the game and we thought we gave everything we could. I thought we created loads of chances. In some other games we didn’t create as many. We had some shots on target, but when the team are defending that well and that deep it’s hard to break them down.

"We had a lot of possession. They had a lot of bodies behind the ball. We put crosses in, they defended it, so we need to look at what ways we can maybe add to our game to score these goals.

"It was hard for us to get the ball in the areas we want and create chances. Credit to them that they defended so well, I thought we gave it our all and worked hard throughout the game, but in football anything can happen."

Chelsea return to action against Arsenal on Tuesday, before an FA Cup clash with Hull next weekend.