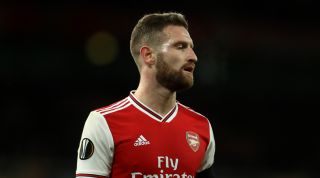 It’s always seemed like Shkodran Mustafi lets his heart rule his head. You can see it in the way he breaks rank from the Arsenal back four to lunge at the feet of attackers; in the furious wagging of fingers at his teammates after committing a mistake.

Whether it’s sensible or not, the German acts out of instinct in most scenarios. He’s a reactor, rather than an anticipator. Some of history’s greatest defenders have been, but in an age in which we’re better at predicting football than ever before, it grates Arsenal fans, to say the least, that Mustafi can’t ever seem to read the script.

In the good old days, it was easy for the most disappointing players at your club to slip into the background. Shkodran Mustafi’s Arsenal career, however, has coincided with the continued rise of social media and the idea that all opinions are - if not equal - welcomed by someone, somewhere on the internet. Twitter is no longer just a self-promotion tool for the wealthy - it’s a 24/7 unregulated, unfiltered conversation about anything and everything. And it’s harder than ever to slip into the background of it.

“We’re only human and we can't switch off our brains, it's always going to be there,” Mustafi told the Arsenal website, in his second interview of the season - yes, second - about how he's dealing with public backlash. “Once you've read criticism - good or bad - it's going to stay there.”

Taking social media out of the equation completely, this is an interview that perhaps wouldn’t have happened twenty years ago. Mustafi openly talks of his confidence, the lack of it and the pressures of his job. At a time when the Premier League is trying to encourage a conversation about mental health, one of its most abused players is extremely candid in the way he talks about his vulnerability and how he has relied on his family for support.

Good on him, for that - it’s brave of a Premier League footballer to be so honest. Mustafi should be praised for the interview, but there are still those who believe he should simply “man up” like those before him. That a bit of criticism never hurt anyone. That it’s sticks and stones, or even that it can be fobbed off as “banter”.

Wherever you stand on the criticism of Shkodran Mustafi - wherever you believe it’s justified and he just can’t handle it, or you really feel for the bloke - his take on the issue is reflective of how modern football is changing.

Footballers’ lives are alien to our own. It’s not just in the money they earn - which some use to justify their abuse - but the intensity of their physical demands and the increase of attention. Many players came from poor backgrounds, made further sacrifices in their childhood and adolescence, and now work high-pressure jobs with most of their lives micromanaged - unlike some of us, they can’t exactly kick back and relax after a stressful day with a beer, a cigarette or any other kind of vice, either.

In the past, extreme criticism may have gotten an extra gear out of players who weren’t pulling their weight. Not just from a booing crowd - the hair-dryer treatment was famous at Manchester United. Jose Mourinho made his name at Chelsea for his frankness. Mauricio Pochettino has even talked of a time when his boss, Marcelo Bielsa, tore into his performance and called him "sh*t". Pochettino cried on his drive home, such was the incident, yet he remembers Bielsa fondly. A bit of fear was seen as a good thing.

These days, bollockings are simply not celebrated. Liverpool players instead wax lyrical of how Jurgen Klopp is as much of a friend to them as he is a boss. One of Zinedine Zidane’s best qualities is his ability to convince and persuade. There was talk of how unpopular Mourinho’s attempts to generate friction were at United, replaced by an altogether happier atmosphere when Ole Gunnar Solskjaer arrived with a softer approach. Hell, even Arsenal fans have found first hand how badly booing can go, after directing abuse at Granit Xhaka last autumn.

These players grew up in a different era and have different challenges to their parents. It might not have bothered stars of yesteryear when fans shouted obscenities at them, but that was then - an age when it was so much easier to ignore. It’s plain to see how such abuse would affect a player like Shkodran Mustafi - an extremely emotional player who leads with his heart on the pitch - and that’s just going by what we see of him on the pitch. We have no idea how much fans’ words really hurt him.

We can’t expect to know what it’s like to be a footballer. Mustafi’s interview is a welcome insight into some of the challenges that they face, and perhaps if we could be open to that, it would go some way to understanding why heavily criticising players, online and in grounds, often creates more problems than it solves.

NEW ISSUE Check out the new magazine, a Euro 96 special