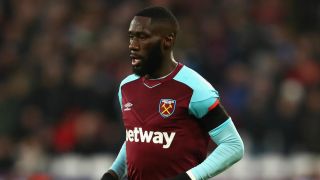 Masuaku faces a six-match suspension after being shown a straight red card for the incident at the DW Stadium.

Hammers boss David Moyes labelled the action "despicable" and agreed with the referee's decision to send him off.

And the 24-year-old has now taken to social media to apologise, albeit without mentioning Powell.

"I want to say sorry for my actions on Saturday. I let down my team-mates, the manager, coaches, board and the fans," he said in a club statement.

"I am very sad because the manager and coaches have put a lot of faith in me but I will work very hard to try and win that back.

"It was in the heat of the moment and out of character for me.

"I know it was totally unacceptable and I will learn from the first red card of my career."