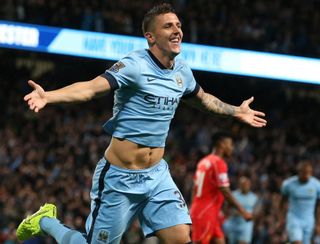 The Montenegro international striker was on target twice in Monday's clash at the Etihad Stadium, as the defending Premier League champions set an early marker by beating last season's runners-up.

Jovetic endured an injury-hit debut campaign in England, but he impressed throughout pre-season and once more showed his quality by aiding his team's cause against Brendan Rodgers' side.

However, the 24-year-old insists three points is more important than his individual achievement and is keen to switch his focus to Saturday's meeting with Stoke City.

"I'm satisfied with two [goals]," Jovetic told the club's official website. "[But] this is about the team, the group and the three points is the most important [thing].

"I'm happy that I had a good pre-season, but then again against Newcastle I didn't score. I'm going to forget this because in five days we have another game with Stoke."

Jovetic warned that Monday's victory will have little bearing on the destination of the title with the season still in its infancy and he is well aware of the challenges City still face.

"It's important to win every game but we still have 36 games to play," he added. "It is difficult because you also have Chelsea, Arsenal, Manchester United and Tottenham.

"They are all good teams and you also other [difficult] teams. Every time you go away to play it's tough. We have to go step by step, at the end we hope we are going to win the Premier League."