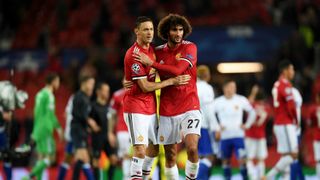 Jose Mourinho explained that Manchester United captain Michael Carrick and Ander Herrera are not getting picked simply because he feels Nemanja Matic and Marouane Fellaini are in the "best form" he has ever seen.

United have enjoyed a wonderful start to the Premier League season and sit joint-top with rivals Manchester City on 13 points after five matches, with Mourinho's men looking far more ruthless than they did last term.

One particular improvement from United has been their notable presence in midfield, with Matic slotting in seamlessly alongside Paul Pogba following his move from Chelsea, while Fellaini has also impressed on a number of occasions, especially in the 3-0 Champions League win over Basel.

As a result, Carrick and Herrera – United's Player of the Year last term – have struggled for minutes on the pitch, with the 36-year-old yet to feature and the Spaniard starting just one league game.

Mourinho urged them to remain patient, reminding them that life at big clubs can often be frustrating, though the pair could feature on Wednesday when United host Championship side Burton Albion in the EFL Cup.

The Portuguese manager told reporters: "Romero played the Europa League final, which was the game of the season for us, and he's not playing.

"Ander Herrera was Player of the Season and he's not starting matches. That's life in big clubs.

"So he is in a team with these two guys who are playing absolutely phenomenally. For Carrick and for Ander it is just patience because their time will arrive.

"They are going to be important players for sure."

Mourinho confirmed that he is likely to rest players for Burton's visit, as United begin the defence of the trophy after beating Southampton 3-2 in last season's final.

But he warned his squad not to take the challenge of a Championship club lightly, telling them that they will lose if they do not play "seriously".

"It's football, it's a competition," he said. "We take it seriously. Of course, I'm not playing David [De Gea] or [Eric] Bailly, but if we go to the next round these guys will play and I'll give rest to others.

"Our squad is good, but we don't have 30 players. We have what we have, and with a couple of injuries now with Pogba and [Axel] Tuanzebe, so we need some of the players that played [on Sunday] to play, and we need some of them on the bench, because we need to have a strong team.

"I know the quality of the Championship and I know if you don't take the game seriously you are going to lose."