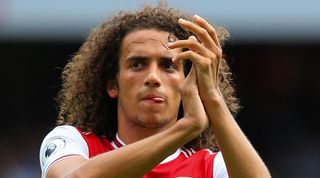 France manager Didier Deschamps has hailed Matteo Guendouzi but urged Arsenal to be patient with the youngster.

The 20-year-old midfielder has made an excellent start to 2019/20, starring in the Gunners' recent 2-2 draw with Tottenham.

Deschamps rewarded Guendouzi with a call-up to the senior France squad for their Euro 2020 qualifiers against Albania and Andorra.

But the World Cup-winning boss, who also lifted the trophy as France's captain in 1998, has warned Arsenal not to expect too much too soon from the former Lorient man.

"Don't ask too much. He's a young player who is still the Espoirs generation, who plays a lot of matches with Arsenal where there is strong competition," Deschamps told Foot Mercato.

"He's the modern midfielder, box to box as they say there, with a lot of power and technical quality too. He's there. What I expect from young people is that they bring this freshness, this dynamism. He is a very young player but with very big potential."

Guendouzi will return to Premier League action when Arsenal face Watford on Sunday.