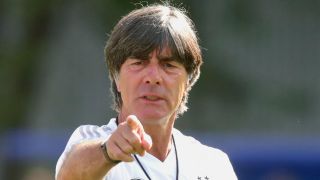 Lothar Matthaus has challenged head coach Joachim Low to get tough on his Germany stars and make it clear they cannot expect a place in the team based on past achievements.

The reigning champions endured a miserable World Cup in Russia, crashing out at the group stage with two defeats from three games.

Low called up three new faces in Thilo Kehrer, Kai Havertz and Nico Schulz for their first UEFA Nations League match against France on Thursday, although the majority of the squad comprises his usual favourites.

And former captain Matthaus says the coach must be prepared to drop any player who does not perform against Les Bleus or in the friendly with Peru in Sinsheim.

"I expect some clear messages from Jogi Low in the future," he wrote in his Sky column. "These can and will be unpleasant truths for some players.

"But just as Niko Kovac moderates things at Bayern Munich, so must Jogi Low. No rewards for past achievements. Stop the unquestioning loyalty."

First training with after . Highly motivated for our match in Munich. September 3, 2018

Matthaus has questioned the decision to include Julian Draxler in the latest squad, with the Paris Saint-Germain midfielder struggling for game time and having failed to make an impact at the World Cup.

He also doubts the credentials of Jonas Hector as the long-term option at left-back as long as he plays for Cologne in Germany's second tier.

"Julian Draxler would certainly have earned a break. At PSG, he plays no supporting role at all," Matthaus said.

He added on Hector, who was left out in order to regain fitness: "He has just agreed with the national coach to withdraw from these international matches. Jogi could have done this already on his own.

"I hold Jonas Hector in high esteem and he is a good player. But it still must be our requirement to find a left-back for the national team in the first division."

Matthaus has also backed Sandro Wagner to reverse his decision to quit international football should Low be willing to discuss a return with the Bayern striker.

Failing that, Matthaus thinks Schalke's Mark Uth deserves to be given a chance after his strong performances for Hoffenheim last season.

"I'm sure Sandro Wagner would like to come back, when Jogi Low looks for a conversation with him," he said.

"Mark Uth would have been a nice alternative. He was the second-best German goalscorer after Thomas Muller last season, with 14 goals and nine assists."