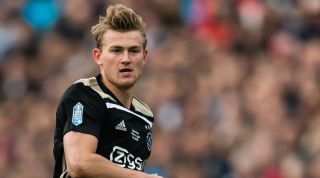 Barcelona are close to agreeing a deal to sign Ajax defender Matthijs de Ligt, according to Mundo Deportivo.

The 19-year-old centre-back has enjoyed a superb season in Amsterdam, helping the Dutch club challenge for the Eredivisie title and reach the Champions League semi-finals for the first time since 1997.

Ajax's brilliant campaign is likely to lead to the break-up of their talented young squad this summer, with midfielder Frenkie de Jong having already sealed a switch to the Camp Nou.

And Barcelona are now on the verge of completing a move for De Jong's team-mate for club and country.

De Ligt has been linked with Liverpool and Manchester United in recent weeks, but the Catalans have long been at the front of the queue for his signature.

Barcelona are also keen to capture Ajax midfielder Donny van de Beek, who is also a target for Borussia Dortmund and Tottenham.

Ernesto Valverde's side, who have already won the La Liga title, face Getafe on Sunday.