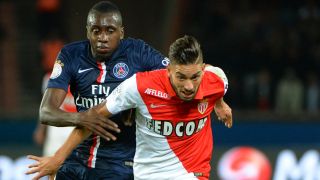 The Ligue 1 champions have endured a difficult domestic campaign so far, falling seven points behind Marcelo Bielsa's Marseille at the top of the table.

PSG may be unbeaten in their opening nine fixtures, but they have only managed three wins as the pressure increased on under-fire coach Laurent Blanc.

The hosts appeared to have done enough at Parc des Princes as Lucas Moura gave them a 71st-minute lead, only for Monaco substitute Anthony Martial to net an equaliser in the 90th minute.

The result left Matuidi fuming and he brought PSG's character and personality into question.

"It [the disappointment of drawing] repeats itself," he told L'Equipe. "It is a bad habit and it must stop.

"Tonight [Sunday], we thought we were there [earning a win], I'm sure that is why we conceded this goal.

"When you are invaded by a certain fear, it does not forgive.

"We have failed, especially at the end, with our personality and character. We have to quickly find them because otherwise we'll lose more points."

Despite their poor form, Matuidi is not convinced PSG's winning mentality has completely deserted them, as he reminds pundits that they proved themselves to be capable of success not long ago.

He added: "It has been demonstrated not so long ago that we were capable of great things.

"Now, we know we need to refocus. The Championship is our everyday life. We must have it in mind; it is important."