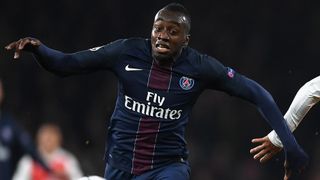 Blaise Matuidi offered no guarantees over his Paris Saint-Germain future, saying it remained unclear where he would end up.

Matuidi, who is contracted with the Ligue 1 giants until 2018, has been linked with a switch to Manchester United.

Speaking after helping PSG win the Coupe de France on Saturday, the midfielder said there were still decisions to be made.

"I don't know yet. I am feeling good in Paris. It's hard as you don't know the real position of the club," Matuidi said.

"PSG made a proposition to me. They are open to everything when it comes to me. There is no decision taken so far."

Matuidi, a France international, arrived at PSG from Saint-Etienne in 2011 and has spent his entire career in his homeland.

If he leaves, Matuidi said he would remember PSG fondly after winning four Ligue 1 titles and 11 other trophies at the club.

"Playing for the club of your heart is beautiful and Paris is the club of my heart. Don't forget that.

"Even if in the future I should leave, Paris stays the club of my heart. And it would be always like that."