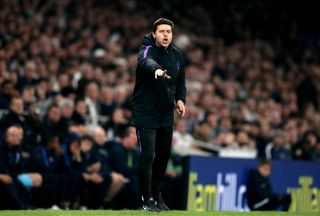 Mauricio Pochettino could not help but smile after his best-laid fire-fighting plans were destroyed after three minutes in the 1-0 Premier League defeat at Bournemouth.

Spurs missed out on the chance to seal a top-four spot for next season as they had to play the best part of 50 minutes with nine men following red cards for Son Heung-min and Juan Foyth.

They looked like holding on for what would have been a first away draw of the season but Nathan Ake’s injury-time header gave the Cherries a win they barely deserved.

The visitors were in total control in the first half and had it not been for debutant goalkeeper Mark Travers, who is only 19, they would have been out of sight by the time Son was dismissed for lashing out at Jefferson Lerma.

With Eric Dier also lucky not to avoid a red card in the first half and Toby Alderweireld on a yellow card, Pochettino opted to bring the pair off at half-time, bringing Foyth on for Alderweireld.

But three minutes later Foyth was back in the dressing room after an over-zealous tackle on Jack Simpson.

Asked whether he took Dier off to protect him, Pochettino said: “Both and Toby too, because the action in the first half that he got a yellow card and then the action which was nearly a penalty with Hugo Lloris.
“There was a lot of risk, with Sonny out we needed to provide the team with fresh legs and to try and avoid some more yellow cards.

“But after three minutes the plan didn’t work.”

The story could have been completely different had Spurs not come up against a goalkeeper enjoying a dream debut.

Mutual respect for today's man of the match 👊👊👊@marktravers40 what a debut 🙌#BOUTOT // #afcb 🍒 pic.twitter.com/4ASOUjII3O— AFC Bournemouth (@afcbournemouth) May 4, 2019

Travers was handed his first Premier League start and showed exactly what he is capable of with four fine stops in the first half to deny Lucas Moura twice and Dele Alli twice.

That proved pivotal as it meant Bournemouth were still level by the time of the first red card.

Bournemouth boss Eddie Howe was pleased with the impression his youngster made.

“It was a great display from him, I think he is someone we really do believe in,” he said.

“As you saw today, he has got great temperament, a great attitude to the game, he played today like it was a training game and that is a huge compliment.

“He kicked the ball well, he obviously made the saves he made, but it was his all-round game management which was hugely impressive.

“It is a nice problem to have, a nice decision I am going to have make in the summer in terms of what I am going to do with all the goalkeepers I have.”