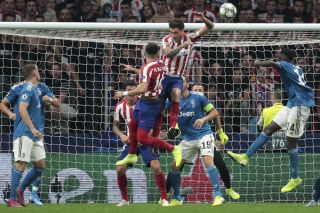 Juventus coach Maurizio Sarri admitted his disappointment after his side surrendered a two-goal lead to be held 2-2 by Atletico Madrid in Champions League Group D.

Atletico Madrid substitute Hector Herrera grabbed a late equaliser at the Wanda Metropolitano to send Sarri and his players back to Italy with only a share of the points when they had been on course to claim all three.

Midfielder Herrera marked his debut as he headed in from a corner to earn his side a deserved point.

Juventus had taken the lead two minutes after half-time when Juan Cuadrado fired home and they extended their advantage with 25 minutes to go courtesy of a Blaise Matuidi header.

Sarri admitted he is side had let two points slip in their Champions League opener.

He told his post-match press conference: “It’s a pity we drew the match because we had the game in our hand for a long time. We need to improve in our aggressiveness and attention.

“Things were on display that we implement every day in training, but conceding these goals too is punishing.”

Juventus defender Leonardo Bonucci admitted his side were on the back foot from the start of the game.

He told the Juventus website: “There was a lot of pressure by Atletico in the first half. When we started moving the ball around, we created hazards and scored. But I am sorry to have conceded two goals.

“We need to pay more attention because we had a great game. We cannot concede so many goals.”