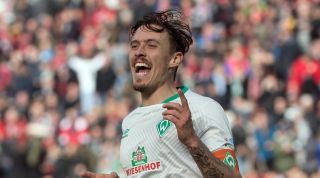 Tottenham will attempt to sign Werder Bremen striker Max Kruse this summer, according to Sky in Germany.

Mauricio Pochettino is determined to bring in a back-up for Harry Kane, with Fernando Llorente likely to leave the club at the end of the season.

And Kruse, who has scored nine goals in 28 appearances for Werder this term, has emerged as a key target for Spurs.

The former Borussia Monchengladbach forward is out of contract in June and is therefore available on a free transfer.

Werder are still hoping to persuade Kruse to sign a new deal at the Weser-Stadion, but the 31-year-old is keeping his options open.

Inter are also interested in Kruse and could offer him a regular starting spot if Mauro Icardi departs San Siro this summer.

The Germany international was linked with a move to Spurs back in 2015, but he opted to sign for Wolfsburg instead.

Tottenham travel to Liverpool in the Premier League on Sunday, before facing Crystal Palace at their new stadium on Wednesday.

LISTRanked! The 15 most productive players in the Premier League this season