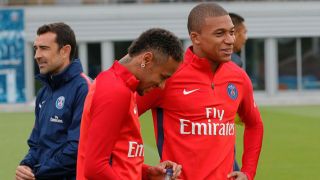 Metz could be the first team to face Paris Saint-Germain's all-star attack of Kylian Mbappe, Neymar and Edinson Cavani.

Mbappe, who scored his first France goal in last week's 4-0 World Cup qualifying win over Netherlands, has been included in Unai Emery's squad for the Ligue 1 trip to Stade Saint-Symphorien on Friday.

The 18-year-old is in line to make his PSG debut after his deadline-day move from Monaco, initially on loan which is expected to turn permanent in a deal worth up to €180million.

Marco Verratti misses out due to suspension, while Angel Di Maria is absent after sustaining an injury while on international duty with Argentina.