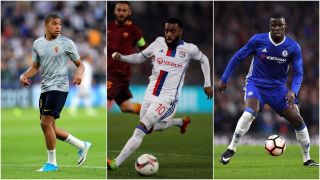 Kylian Mbappe has been named in a star-studded France squad for his country's triple-header of matches next month, while Alexandre Lacazette and Kurt Zouma return.

France have friendlies against Paraguay and England either side of an away World Cup qualifier against Sweden on June 9.

Mbappe, 18, made his first two international appearances during the March fixtures against Luxembourg and Spain and retains his place in Didier Deschamps' 26-man squad after helping Monaco to their first Ligue 1 title in 17 years.

Lyon striker Alexandre Lacazette and Chelsea defender Kurt Zouma could make their first appearances in 18 months after earning recalls alongside Tottenham midfielder Moussa Sissoko, whose last game was in November 2016.

Zouma has been working his way back to fitness from a serious knee injury since January, while Lacazette has scored 26 Ligue 1 goals in a phenomenal campaign.

There is still no place for Real Madrid striker Karim Benzema, who has not been selected since being charged by police in connection with an alleged blackmail attempt targeting his Les Bleus team-mate Mathieu Valbuena, a case which is yet to go to trial.