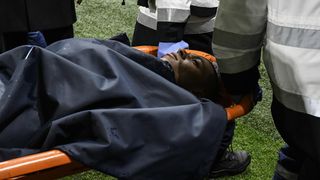 Kylian Mbappe will be fit in time to play in Paris Saint-Germain's Champions League last-16 tie against Real Madrid, Unai Emery has confirmed.

Mbappe was hurt in a heavy collision with goalkeeper Anthony Lopes during a 2-1 defeat to Ligue 1 rivals Lyon on Sunday.

PSG doctor Eric Rolland said Mbappe's injury was "nothing serious", although the teenager had to be taken down the tunnel on a stretcher.

But despite reports Mbappe could be set for two months on the sidelines, Emery indicated the striker will be back in action soon.

"After the Lyon loss, he immediately asked to play again," Emery told reporters after PSG's 4-2 victory. "We must trust the doctor and be patient though.

"Maybe if it had been a season-defining match, we would have risked it. Not today, though. We will see for Saturday [when PSG host Montpellier] and next Tuesday [against Rennes in the Coupe de la Ligue semis].

"However, I hope that he will be available by February 3 [against Lille], at the latest. He is good, quiet. He is normal. It's a strong blow and the risk is to get another one."

The first leg of the blockbuster Champions League tie with Madrid takes place on February 14 in the Spanish capital, with Emery seeking to end the reigning champions' two-year dominance of the competition.

Neymar, meanwhile, has not featured for PSG since being whistled by fans during an 8-0 thumping of Dijon, in which he scored four times but denied Edinson Cavani the chance to surpass Zlatan Ibrahimovic's club goals record by pulling rank over a late penalty.

"We should give love to Neymar," Emery said. "He is a player to enjoy.

"He continues the recovery with the physio. I hope he comes back to the group very soon.

"He is here in Paris and he is a great player. We must give him affection."