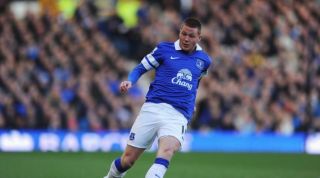 The Republic of Ireland international midfielder required treatment in the second half at the King Power Stadium following a collision with a Leicester player.

Martinez was dealt a major setback in the build-up to Everton's opening Premier League game with the news that Ross Barkley could be out for five months with a knee problem, but the Spaniard was spared a double injury blow as McCarthy was able to carry on playing.

"James is not a player that goes down easy, so when you see him down you fear that something is really wrong," Martinez told the club's official website.

"He has a nasty stud mark on his shin.

"It was good that he was able to finish the game, but it was a fortunate incident because it could have been really bad news."

Martinez is currently awaiting confirmation of how long Barkley will be sidelined for after an initial scan proved inconclusive.