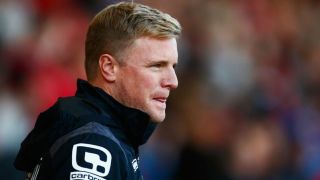 Howe, 37, is one of the game's brightest young talents after remarkably guiding minnows Bournemouth to the Premier League last season.

Bournemouth were languishing in League Two in 2009 when Howe - 31 at the time - took over at Dean Court and the former defender has since gone on to steer the club into England's top flight.

As expected, his work has not gone unnoticed, with former England manager McClaren backing his countryman to follow in his footsteps and lead the national team.

"How he has got Bournemouth up, he has done a fantastic job, and he has got the potential to be a future England manager if he keeps going the way he is," McClaren said ahead of Newcastle's trip to Bournemouth on Saturday.

"He has found a home at Bournemouth and he has got them playing very well. He's young, he's got years ahead of him.

"What he's built at Bournemouth, to get that club into the Premier League, is a great achievement. Yes, it's potential, but there are plenty of names bandied about, so I'll bandy his name about."