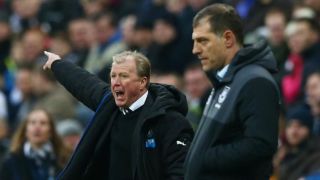 Ayoze Perez gave Newcastle an early lead but it was Wijnaldum's goal - a smart finish from Daryl Janmaat's cross - that proved key as West Ham hit back through substitute Nikica Jelavic.

Newcastle's victory broke a five-match winless streak and lifted them above Swansea City and out of the Premier League's relegation zone.

"He's everything that we thought he would be," said McClaren of Wijnaldum, who is Newcastle's top scorer but is yet to find the net away from St James' Park.

"We said to Jonjo [Shelvey], you'll enjoy playing in this team because we've got footballers and Gini is one of those.

"He's our link. It's important to get the balance right in the team and we allow him to make runs forward.

"He's very effective, strong, he's getting better and better. He's got used to the tempo and he can score goals.