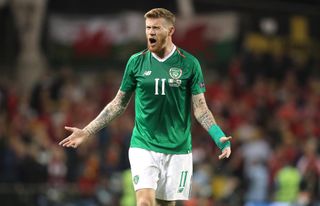 Stoke midfielder James McClean has revealed the sickening abuse he has received in a birthday card.

The Republic of Ireland international, who turned 30 on April 22, received a card containing a stream of vitriolic and abusive comments about his nationality. It also includes vile references to Hitler, Operation Flavius and Bloody Sunday.

McClean is a regular target of abuse for his well-documented political reasons as to why he will not wear the poppy.

McClean has previously taken to social media to call for the Football Association to do more in attempting to prevent such behaviour.

He took to Twitter on Wednesday to reveal the latest abuse he has received, posting images of the vile words written on the card’s front, back and inside.

With the caption ‘No words needed’, phrases such as “Fenian sub human b*****d” and “Happy Birthday and die on April 22” can clearly be read.

Inside, the hatred escalates, with Bobby Sands referred to as the 1981 “Slimmer of the Year”.

Sands was a member of the Provisional Irish Republican Army who died on hunger strike while imprisoned at HM Prison Maze after being sentenced for firearms offences.