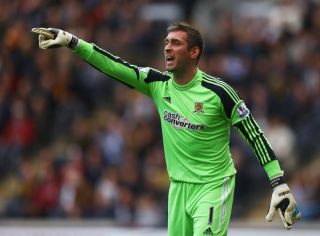 The duo were expected to be out for the rest of the season, as goalkeeper McGregor broke three ribs and suffered kidney damage in the loss to West Ham last month, while full-back McShane has missed over two months with an ankle ligament injury.

With only three league games remaining before the Wembley encounter on May 17, time is running out for the pair to be back in time, yet Bruce is willing to allow the pair every opportunity to put themselves in contention.

"Allan is jogging on the training ground and he's making a desperate effort to be fit," Bruce said.

"I'm not going to stop it but obviously he's got three broken ribs and a damaged kidney. Despite that he's doing his very best to be fit for the FA Cup final.

"If he's making those strides I'm not going to say 'whoa, Allan, you're not going to be playing'. If he can make himself available then great.

"Paul is due to be training on Saturday after nine weeks out with his ankle as well and I'm not going to rule anyone out yet."

Hull face a visit to Craven Cottage to face relegation-threatened Fulham on Saturday, and three points would all but guarantee safety.

But Fulham have shown drastic improvement under the stewardship of Felix Magath, and Bruce is well aware of the difficulty his side face.

"He's (Magath) certainly made an impression and given them a chance," he added. "He's been positive since he walked in and was adamant they weren't going down.

"He got a couple of wins back to back, which is huge at the bottom, and they've got a chance like everyone else has now. He's galvanised them a bit and had a response."