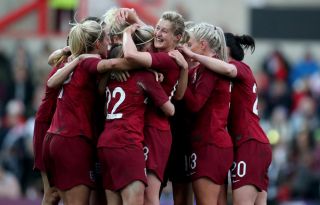 Beth Mead finished off a smart team move to give Phil Neville’s Lionesses the half-time lead – with Ellen White thrashing home just seconds after the restart.

Spain pulled one back through substitute Aitana Bonmati but England played out the remainder of the contest to seal a 2-1 victory.

Neville, true to his word ahead of the friendly double-header, made plenty of alterations from Friday’s 1-0 defeat to Canada as only Rachel Daly and Toni Duggan retained their places.

Captain Steph Houghton missed out with a groin problem while Lucy Bronze was another enforced change for Neville, who has two further warm-up matches against Denmark and New Zealand, before England’s World Cup gets under way with a June 9 clash with Scotland.

England – who sit 10 places above their 13th-ranked opposition – faced early pressure from Spain, who forced a free-kick and three corners in the opening five minutes.

A first meaningful attack from the hosts saw White’s low cross easily collected by Sandra Panos in the Spain goal before the Birmingham forward saw a shot deflected to safety soon after.

Panos was tested for the first time just before the half-hour mark as Mead was played in by Jill Scott and saw her low drive pushed away.

England were starting to build up a head of steam and made the most of it nine minutes before the break when Mead turned in the opening goal.

A well-worked move saw Duggan latch onto Jade Moore’s pass and find White, who put it across goal with Arsenal’s Mead sliding in at the back-post to finish from point-blank range.

Spain responded well but Maria Leon dragged a shot wide of Ellie Roebuck’s goal as the Manchester City goalkeeper made it to half-time – when she was replaced by Mary Earps.

England needed less than a minute of the second-half to double their advantage, White finishing brilliantly from Scott’s pass to put the hosts in control.

Spain reduced the arrears at the midway point of the second-half as substitute Bonmati tucked home after Maria Francesca Caldentry danced through some static England defending to lay the chance on a plate for her team-mate.

Earps then made a couple of good stops to keep out Jennifer Hermoso and Virginia Torrecilla before an England breakaway led to Meads miscuing an effort as she looked to catch Panos off her line.

The Wolfsburg goalkeeper almost allowed Spain a late leveller as she burst from her line and slipped over – although Bonmati could only wastefully shoot wide with Earps not even in the picture.

That proved to be Spain’s best chance to find an equaliser as England held on to secure victory and give Neville plenty of positives with two matches remaining until the World Cup begins.