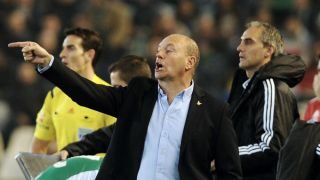 Pepe Mel has been sacked as coach of Real Betis after a 1-0 loss at Getafe on Saturday left the club 15th in La Liga, five points outside the relegation zone.

The former West Brom manager has overseen a miserable run of results of late, with Betis having gone eight games without a win in all competitions, and the club's board chose to act on Sunday in an effort to stave off the threat of relegation.

A club statement read: "The board of directors of Real Betis tonight decided [on] the dismissal of José Mel Pérez as first team coach. Real Betis appreciate the services rendered to our club by Mr Mel and wishes him well in [the] future.

"The president of the organization, Juan Carlos Ollero, and sporting director, Eduardo Macia, will appear at a press conference from 11.15pm in the press room at the Benito Villamarin Stadium."

Mel's latest tenure began in December 2014 and he led Betis to promotion from the Spanish second tier last season.

He previously coached Betis between 2010 and 2013 and was also relieved of his duties to end that spell in charge.