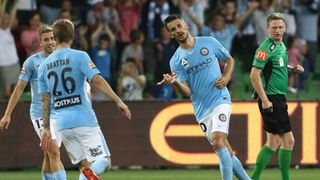 Marcin Budzinski and Dario Vidosic both scored twice to help secure a 5-0 A-League hammering of Adelaide United, moving Melbourne City up to third, but a serious injury to Nathan Atkinson provided put a dampener on things.

Teenager Atkinson was taken off on a stretcher deep into the second half after landing awkwardly on his ankle, with several team-mates and opponents looking visibly distressed as he required oxygen.

By that point, City were already 2-0 up and cruising, with Polish midfielder Budzinski playing a starring role, breaking the deadlock after half an hour with a deflected long-range strike.

His second arrived a few minutes later, as he stabbed in from close range after seeing an initial effort saved.

Atkinson was forced off with quarter of an hour to go after nearly 10 minutes of medical attention, the hosts going on to win comfortably despite that blow.

Vidosic's brilliant double soon followed, producing a stunning volley from the right side of the penalty area and then stroking a well-placed 20-yard finish into the bottom-right corner.