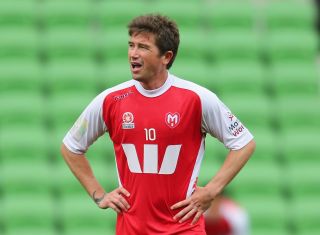 As expected, the former Melbourne Victory marquee was unveiled by Heart as their captain for the 2013-14 campaign, three months after arriving at the club.

Speaking at his announcement as skipper on Wednesday, the 34-year-old said his objective for the season ahead was to lead the Heart to their first silverware.

"(Coach) John (Aloisi) puts a great team together and that's the kind of attitude I want the players to be thinking about. There's no point thinking about second. Let's think about the top and work from there."

A recall to the national team ahead of the World Cup in Brazil is also a priority for the ex-Leeds United and Liverpool man, who earned the last of his 58 caps for Australia in June 2012.

"I think so," he said when asked if a return to Holger Osieck's Socceroos plans was an achievable target.

"That's the reason why I came out here in July, to get a solid pre-season under my belt ... to show to Australia that I'm ready to play, hopefully (have) a great season in the A-League and give myself every opportunity to be part of the Australian squad that's going to travel to Brazil."

Dutch centre-back Rob Wielaert and midfielder Massimo Murdocca - both of whom, like Kewell, are new arrivals in this off-season - had also been in contention to take over as skipper.

But Heart's coach said he did need long to make up his mind before giving the responsibility to his former Australia team-mate.

"Very easy after the last couple of months," Aloisi said of his decision.

"I've known Harry for a while and I know what he's like as a player and the ability he's got. But just to see the players and how they are around him. The training's just lifted as soon as he walked into that changing room.

"We gave it a couple of months just so I could see how it's going, but it's proven that Harry's got the leadership qualities that we're looking for."