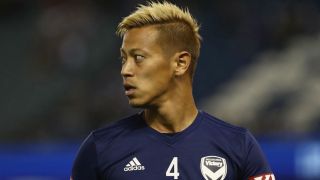 Keisuke Honda experienced a bittersweet start to life in the A-League as Melbourne Victory let slip a one-goal lead to lose 2-1 to Melbourne City on Saturday.

A marquee signing by the reigning champions, Honda marked his Victory debut by heading his new employers in front in the 28th minute of the derby fixture.

However, City levelled before the break thanks to a contentious penalty, referee Kurt Ams using technology to adjudge Bruno Fornaroli had been fouled after being sandwiched between Corey Brown and Raul Baena on the edge of the area, despite replays suggesting there was minimal contact.

Victory appeared to have been reprieved when Florin Berenguer's spot-kick was saved by Lawrence Thomas, only for the alert Ritchie de Laet to prod home the rebound.

James Troisi hit the post for the home team with a curling left-footed shot from distance in the second half before Riley McGree grabbed the winner for City.

Honda tried to draw his team level, a deflected shot needing to be tipped over by Eugene Galekovic, while Kenny Athiu blazed over when well placed inside the area, letting City off the hook.