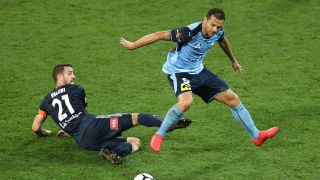 Sydney FC striker Bobo continued his phenomenal goalscoring season with a brace as the A-League leaders came from behind to win 3-1 against 10-man Melbourne Victory.

Brazilian Bobo now has 18 goals in as many appearances, his double helping Sydney go nine points clear of Newcastle Jets, who drew 2-2 with Melbourne City on Thursday.

Following a keenly contested and goalless first half, the hosts took a 58th minute lead, with Besart Berisha converting from the penalty spot after Jai Ingham was brought down by Josh Brillante.

That was Berisha's eighth of the campaign but the prolific Bobo headed home to ensure Victory's lead lasted a shade over two minutes.

The reigning champions were in the ascendency and the decisive moment arrived in the 77th minute – Jason Geria receiving a second yellow card for fouling Bobo, who made no mistake from 12 yards.

Substitute David Carney latched on to Adrian Mierzejewski's pass to make sure of the points and enhance Sydney's advantage at the summit.

FT | A huge win as the Sky Blues move nine points clear at the top of the A-League ladder January 26, 2018