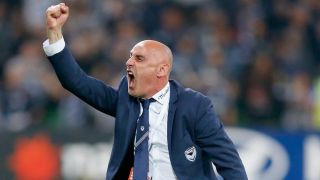 The striker's 14th goal of the league season secured a come-from-behind triumph in the closing stages of an entertaining contest at AAMI Park.

All the goals came in the second half, with Nikola Mileusnic putting the visitors ahead before Leroy George levelled and Berisha spectacularly set up a semi-final meeting with reigning champions Sydney FC late on.

Only two points separated the sides in the regular season and a close-fought opening half yielded few chances of note.

But the breakthrough arrived in the 57th minute as Mileusnic collected a long pass and prodded past onrushing goalkeeper Lawrence Thomas.

The response from Kevin Muscat's side was swift and decisive, George equalising within six minutes courtesy of a header from Kosta Barbarouses' cross.

And it was Barbarouses who provided the delivery for Berisha's acrobatic finish to settle matters in the 89th minute.