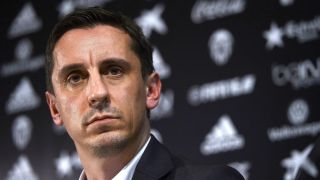 Gary Neville is suffering from the “big challenge” of a language barrier, according to Valencia icon Gaizka Mendieta.

Neville is yet to win a league game since taking charge of the Mestalla club in December in his first senior coaching position and saw his side jeered after the team's 1-1 Copa del Rey draw with Las Palmas on Thursday.

Two-time Champions League runner-up Mendieta said expectations remain high at the club and that it is up to Neville to improve the club’s on-pitch fortunes.

"It's a big challenge for him," he told Omnisport.

"It's his first job as a main manager. Not speaking the language is a big challenge when you go to a new country.

"But he's got experience having been with the English team, and that helps. But, like I said earlier, football is still very demanding in every aspect. And now in his career as a manager, you have to make it your own way."

Valencia have not finished outside the top-six in La Liga since 2007-08 but are currently languishing in 11th place in the table following just five wins from 20 matches.

"Their ambition is to be back in the top four teams in Spain, to aim for the Champions League every season," Mendieta continued.

"I think that's where Valencia should be anyway. So they have to be ambitious to be in the top three, top four teams in La Liga and at the moment they're not. So they have to challenge themselves and to try and bring Valencia where it should be."