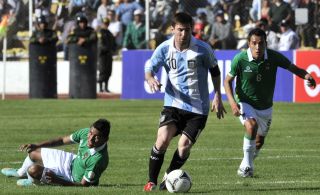 The 26-year-old has recently made a return to the Barca first team after two months out with a hamstring injury.

But Messi believes he will be back to his best when the World Cup comes around in June, and feels the Argentina team as a whole has cause for confidence.

"To be honest, I think the World Cup comes in a good moment for us as a national team and as a group because we have grown together," he said. "I think it is a spectacular group, and all of us have a good relationship.

"I believe all of us are at the perfect age and almost everybody has already played a World Cup, so I think we are arriving in a good moment."

Argentina line up alongside Bosnia and Herzegovina, Iran and Nigeria in Group F, but Messi has stressed they will have to be at their best to progress.

"After the draw, everybody said the group was very easy and Argentina is already qualifying," he continued. "In a World Cup you have to play for every single game, because there are not easy teams.

"We hope to finish on the top of the group.

"You need a bit of luck, but we hope that all of us will arrive in good physical and mental shape to do well.

"I think it is going to be very special. All the World Cups are like that, but especially this one because we play in Brazil.

Despite eagerly anticipating the trip to Brazil, Messi is well aware of the challenges that lie ahead at club level.

"Before the World Cup we have a lot of important things with Barcelona," he added. "We have, the Champions League, La Liga and the Copa del Rey."