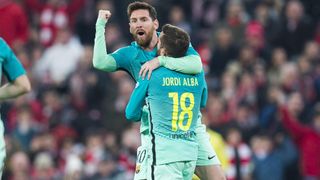 Ronaldo has taken centre stage this week in the wake of a stunning hat-trick in Madrid's Champions League win over city rivals Atletico.

But Messi is well clear atop the LaLiga goalscoring charts, having netted 33 times to Ronaldo's 20.

Alba offered some praise for Ronaldo, but predictably said his Argentine team-mate was better.

"I don't know who decides the Ballon d'Or winner, or the best in the world," he said on Thursday.

"Everybody has their own opinion. At one point, Xavi or [Andres] Iniesta should have won it.

"You already know my opinion, because to me, Leo Messi is the best player in the world.

"Cristiano is a great player who scores many goals. He's a genius, if I said it any other way I'd be lying.

"To watch on the pitch... I think people prefer Leo, it doesn't matter which team you support."