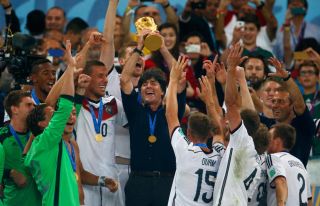 Gotze struck the decisive goal in the 113th minute at the Maracana, sealing Germany's fourth World Cup success with a 1-0 extra-time victory.

The Bayern Munich man chested down a cross from Andre Schurrle on the left before volleying in the Cup-winning goal.

"I told Gotze to show the world you're better than Messi. I had a good feeling with him," Low said.

Low said their triumph came down to a 10-year plan that eventually bore fruit, with now United States coach Jurgen Klinsmann among those the German boss credited the win to.

"We started this project 10 years ago and what has happened today is the result of many years' work, starting with Jurgen Klinsmann," said Low, with Klinsmann coaching Germany from 2004-06.

"We've made constant progress, we believed in the project, we worked a lot and, if any group deserves it, it's this team.

"We've always played good football and I believe that over this tournament, over seven matches, we've shown the best performances of any of the teams here in Brazil.

"The boys have also developed a team spirit which is unbelievable."

Low said their narrow victory was all they required, and that "champions" get the job done in tight situations.

"Champions will do what they have to do," Low said.

"We never stopped dreaming about this for years and worked hard to achieve."