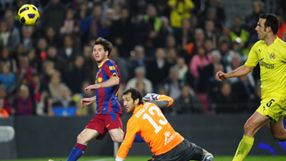 Uruguay striker Diego Forlan snapped a two-month goal drought with a double in Atletico Madrid's 3-0 victory at home to Osasuna and Athletic Bilbao held on for a 1-0 success against Almeria despite going down to nine men with 20 minutes left.

Villarreal have 23 in third, with the gap to the two La Liga giants, who meet in Barcelona at the end of this month, already beginning to open up.

With Barca and Villarreal tied at 1-1 after first-half goals from strikers David Villa and Nilmar, Argentina forward Messi showed why he is the reigning World Player of the Year with a finish of breathtaking skill in the 58th minute at the Nou Camp.

Twice exchanging passes with Pedro, he sped past the static defenders and, as Diego Lopez sprinted out, lifted a delicate angled chip over the Villarreal goalkeeper with his weaker right foot and into the empty net.

The Barca faithful roared their approval and chants of "Messi, Messi, Messi" rang out around the giant arena.

His second in the 83rd was less spectacular but made the game safe against a dangerous Villarreal side.

Pedro's shot ricocheted into Messi's path and he deflected the ball past Lopez low into the corner.

They were the 23-year-old's ninth and 10th league goals of the campaign, leaving him one short of Real Madrid forward and top marksman Cristiano Ronaldo.

"We are very happy with the win because we were facing an important rival who play very well," Barca fullback Daniel Alves told reporters.

"(When) we are playing at our level it's difficult to beat us here at the Nou Camp," he added.

After dominating the early stages, Barca had taken a deserved lead in the 22nd minute when Villa raced on to Andres Iniesta's pass, took the ball past Spain team-mate Carlos Marchena and finished clinically into the far corner.

A burst of pace from Nilmar created the equaliser four minutes later. The Brazilian left Carles Puyol for dead and his clipped shot over Victor Valdes went in off the post.

Barca have now beaten Villarreal, Sevilla, Valencia and Atletico Madrid, four of the teams who were touted as potential challengers for the title.

Uruguay forward Forlan, joint top scorer at the World Cup in South Africa, has been off colour since netting three goals in the opening two games of the campaign and scored the third of those at Athletic back on September 11.

He grabbed his fourth of the season in the 26th minute at the Calderon when he reacted faster than the Osasuna defenders and rifled home the rebound after goalkeeper Ricardo Lopeza failed to hold a low Sergio Aguero drive.