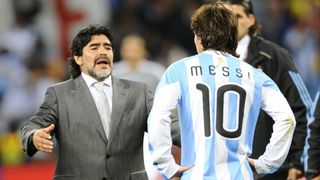 Maradona was a World Cup winner with the South American nation in 1986, a feat Messi is yet to match in his international career after last year's World Cup final defeat.

Yet Menotti is in no doubt that four-time Ballon d'Or winner Messi offers greater quality to Argentina than Maradona, suggesting the rest of the squad fail to help the Barcelona star perform at his best.

"In the last 20 metres they are similar," Menotti, who managed Argentina to World Cup glory in 1978, said.

"He scores goals that only Diego did.

"Messi gives much more quality, there's no doubt. And Argentina sometimes help him [show that] and sometimes not."