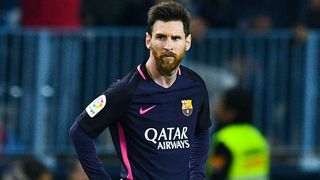 Barcelona defender Samuel Umtiti has rubbished the idea that Lionel Messi has a "black list" of players he wants the club to sign.

A report in Spain surfaced last month suggesting the Argentina star has named a selection of transfers he wants Barca to make before next season.

Umtiti, however, says composing such a list would be out of character for his team-mate.

"I'm proud to say that Messi is my friend," he told Telefoot.

"The black list? Knowing Leo Messi, I really don't think that it's true. He doesn't have the time to think about all that."

Umtiti, who has impressed in his first season in LaLiga since joining from Lyon in a €25million deal, believes he has improved by training against Messi, Luis Suarez and Neymar.

"It's not easy but I think it's one of the best ways to develop. For me, they are the best forwards in the world," he said.

"They're three very good team-mates. We can have a laugh, there's a good atmosphere between them, as there is with the whole team."

The 23-year-old also revealed that advice from former club captain Carles Puyol has helped him to adapt to life in Catalonia quickly.

"I didn't expect to play as much in my first season. I'm trying to play as well as I can," said the France international.

"I speak with Puyol a lot. It's flattering because he's an example for me. I feel really good in this team, I'm having fun."

Barca suffered a 2-0 defeat to Malaga on Saturday that leaves them three points behind league leaders Real Madrid, having played a game more.

Luis Enrique's side now turn their attention to the Champions League quarter-final with Juventus and Umtiti has warned the Serie A leaders that a repeat of their remarkable 6-1 second-leg win over Paris Saint-Germain in the last round cannot be ruled out.

"It was the craziest game," he said. "Even in my dreams, I would never have thought that it could happen like that.

"We can do the same if it becomes difficult against Juventus."