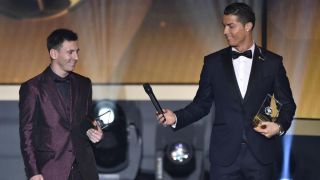 Zinedine Zidane has voiced his admiration for Cristiano Ronaldo and believes the rivalry with Barcelona ace Lionel Messi only spurs on the Real Madrid attacker to get the best out of himself.

Ronaldo and Messi are widely regarded as the best players in the world and have won seven Ballons d'Or between them, with the Argentine winning the prestigious individual trophy on four occasions and the Real forward taking the award home three times.

Zidane has hailed Ronaldo's attitude on the training pitch and feels he has developed into a true Madrid legend over the years.

"You have to see Ronaldo on the training pitch. It is simply amazing to see him in action," Zidane told Canal+.

"The rivalry with Messi is only pushing him to get the best out of himself.

"Ever since Raul has left Madrid, Ronaldo has gone on to develop into another club legend.

"He is feeling very well at Real Madrid."

The 30-year-old recently netted a double for Real in their 2-0 win over Malmo to equal Raul as the Santiago Bernabeu side's all-time top goalscorer on 323 strikes.

He has scored 10 goals in nine appearances in all competitions for Real Madrid this campaign.